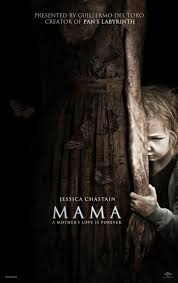 Thanks to the magic of the movies, we’ve become accustomed to all manner of spectres, ghouls and monsters. It takes far more to spook an audience today than it did in the golden age of the original Frankenstein, The Wolf Man and  Dracula. Blood is simply corn syrup or CGI, and we, the audience, know that. We understand there is no actual danger on the screen that can harm us, so we’ve required more to scare us. This has cheapened the genre into shocking the audience (which certainly has it’s place) or by using cheap “jump scares” to achieve that coveted cash cow genre tag that has become horror. The PG-13 horror movie has become a novelty. It has morphed into the stepping stone for young children to acquire a taste for the more gruesome offerings in the R rating. This wasn’t always the case, and while the things that scare each individual person are as polarizing as the comedy genre, there are some decent PG-13 movies that manage to elicit that icy tingle that crawls uninvited up your spine. Mama is a movie that remained solidly in it’s PG-13 rating, but still gave me that tinge of adrenaline and discomfort that I absolutely love while watching a movie that’s supposed to scare me.

Moma tells the story of a two sisters who survive a tragedy that leaves both parents dead. The two spend (off screen) five years in the woods, being cared for by an entity known as “Moma”. When they are found the two girls are almost completely feral. They have lived like animals through some very critical years of their development. Their uncle and his girlfriend take the two in to raise them as their own, with consequences far more dire than they anticipated.

Guillermo del Toro has a knack for seeking out spooky projects to fund. The Orphanage is one of my favorites in the genre, and was also produced by del Toro. For this film he hands the reigns to Andrés Muschietti allowing them to expand upon the short film he and his sister, Barbara Muschietti  (who co-wrote the film) created. For his first full length directorial movie he created a sleek, spooky and visually fulfilling little dark fantasy feature. Jessica Chastain plays the punk-rock girlfriend to Nikolaj Coster-Waldau’s Lucas, the uncle to the two girls. Seeing Chastain as a “punk rocker” was kind of a strange role, but as the film progressed she made it work, and her character arch was probably the most compelling in the movie. Isabelle Nélisseplays Victoria, the younger of the two sisters and the one most attached to the entity that raised them. She is fantastically creepy. She’s not like your typical scary-movie-evil-child. She’s a little girl that was raised to have animal-like mannerisms and is devoutly attached to her mother figure…who just so happens to be a ghostly and violent apparition. Speaking of the titular monster; Javier Botet manages to pull off some of the freakiest movements since The Exorcist. He is capable of moving his body so dramatically that the only CG needed for the monster was to make the hair flow through the air. The movie employs a fantastic blend of CG and practical effects.

I alluded to the fact that I considered this movie more of a dark fantasy than a horror. I stick by that judgement. It’s an interesting movie, and it’s entertaining but it also manages to spook me at all the right times. It’s fantastically creepy and beautifully crafted. While not the crowning jewel of the horror genre, Moma manages to lend more credibility to the milder horror genre without compromising on it’s premise and execution. 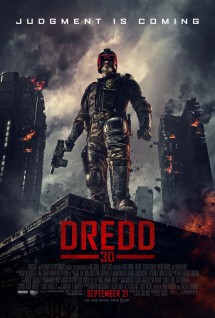 In my last post, Ryan Partlow mentioned a movie that was almost completely overlooked this past year. It deserved much better than what it got at the box office. I’ve decided to give my two-cents Dredd 3D.

Movies tend to muddle themselves up quite frequently. How often do you get a fairly interesting action movie with a strong cast, only to have the focus of the film go off in a hundred different directions, ala Spider Man 3, in which we’re introduced to far too many villains and side plots? There is a fine line between what a director wants to accomplish with their film and what is actually possible. The closer a director is to that line of what is possible without going over, the better off the movie tends to be. A movie may not have a very ambitious plot, but if those behind the camera know what they want and how to attain it to it’s maximum potential, it’s going to be a better experience for everyone. In Dredd 3D the filmmakers involved were working with a below average budget. They knew their limitations both in regards to story and financial ability and they nailed it.

Dredd follows the titular hero as he takes the rookie, Anderson, out for observation. While on the call they unwittingly cross the “MaMa Gang” and find themselves locked in a massive vertical cement city. The MaMa gang consist of some of the most ruthless gangsters in Mega-City One; the fictional post apocalyptic city/state in which the story takes place. Ma-Ma (played by Lena Headey) is a the head of the gang, she is responsible for the distribution of the drug SLO-MO, a narcotic that makes the user feel as if time is passing at 1% of its normal speed. She is a ruthless psychopath. Karl Urban plays Dredd perfectly; cold, calculating and unforgiving. Anderson (played by Olivia Thirlby) is a young woman with psychic abilities who is in the process of becoming a Judge. Judges are the cities law enforcers who make judgments and pass sentences on the spot. The world of Dredd is extremely violent and brutal, which is part of what makes this movie so fun.

There is no plot twists in this movie. There are no odd tangents that the characters go off to follow to the detriment of the viewers, this is quite simply one entire gang verses two Judges. With the massive concrete tower sprawling into the sky, it gives the entire film the feeling of an old school video game as our heroes work their way up to the top floor. This feeling that is enhanced by the increasing body count. It’s an extremely simple process, and the characters themselves have very little character arch; but that was precisely what was intended. We’re treated to something like an 80s action film, without the melodrama. The original Dredd character was based off of Clint Eastwood’s character in the  Dirt Harry movies, a parallel that becomes more and more clear as the movie progresses. From all points, this movie should have just been another mindless action movie lost in the white noise of it’s genre. the actors involved executed their roles so well, and the makers of the film were so devoted to the source material that the project meant too much to let it fall into the standard cliches.

The quality is superb, it’s unflinching in it’s brutal violence, unrelenting in it’s adrenaline filled action scenes, and unforgiving towards evil. Next to Cabin in the Woods, Dredd 3D was the most fun I had in theaters last year.