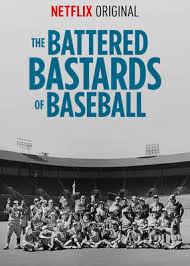 “It’s hard not to be romantic about baseball.” this one line stuck with me after watching 2011s Moneyball. It stuck because it was wrapped in a universal truth. Baseball has been responsible for a good number of emotionally charged films. Sports movies in general are easy targets for that feel good camaraderie loving demographic that contains the vast majority of people in America. While I personally don’t follow any sports teams actively, I completely get why it’s such a universal phenomenon. Especially with an underdog story where the team in question ends up coming out on top. The Battered Bastards of Baseball is a documentary with as much heart as Miracle, Moneyball and Angels in the Outfield combined, offering a look into a lesser known chapter of sports history.

The Netflix Original documentary tells, from beginning to end, the unusual tale of the Portland Mavericks. The foul mouthed, irreverent minor league ball team was thrown together by former ball player and hollywood veteran Bing Russell. The film is primarily about the Mavericks, but uses Bing as a constant focal point. Starting with his love for baseball at a young age all the way to his running of the Maverick’s franchise. Bing Russell used the Mavericks to bring privately owned clubs back to baseball. Whereas most minor league teams were simply farms for the major leagues, Bing wanted the Mavericks to be the best they could be offering a chance for both players and fans to experience a minor league game that went to it’s full potential. What that meant was offering open tryouts to anyone that showed up; essentially the rejects of the baseball world. The documentary highlights the short career of the team. It seeks to showcase the heart of the team by interviewing players, fans and sports writers. Through this process we glean a good picture of what made them an anomaly in the sports world. They weren’t just the underdogs, they were rebels, they fought against the norm and were both rewarded and punished for it.

The film is short and energetic, it uses the power of nostalgia to fuel the interviews and thought process of each participant. Bing’s son, Kurt Russell, (Wyatt Earp himself) who played for the Mavericks, knew Bing as a father as well as the owner offers an inside look into what home life was like and what drove the man behind the Mav’s. The film utilizes an electrifyingly charged score that’s as simple as it is effective. The runtime is relatively short, at under 90 minutes, but it’s enough. The story is small and personal, so much so that it probably couldn’t have sustained a longer screen time. It’s an interesting look into the business of baseball and what happens when the stars align enough to create something truly unique.