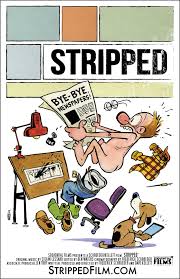 In a recent review, I discussed the film Dear Mr. Waterson. It was an overly sentimental look at one of our time’s most beloved comic strips Calvin and Hobbes. That film scratched the surface on the politics and cultural ecology surrounding the specific strip, allowing a number of people to relive their favorite iterations of the comic strip. In essence, it was one big “we love Calvin and Hobbes” tribute. While it was entertaining and nostalgic, it was a shame the movie didn’t delve deeper into the creative process and business model of the comic industry. At it’s best Dear Mr. Waterson was a fun little trip down memory lane; at it’s worst the film was a self serving parade for the director to talk about how he’s their biggest fan. The title of that film centered around an unresponded letter to the creator of Calvin and Hobbes, Bill Watterson. In Stripped we get all the missing elements, as well as hear, for the first time for most of us, Bill Watterson as he talks about the industry that made his creations pop culture icons.

Stripped is a documentary film that sets it’s lense squarely on the comic strip industry refuses to look at anything else. Directors David Kellett and Frederick Schroeder allow the giants of the comic strip world drive the narrative. Their examination is vast, touching on everything from the creative process to licensing of merchandise. The vast differences in philosophy between comic creators is staggering considering all their creations resided on the same page of a newspaper together. The crux of the movie is the divide amongst the newspaper comic creators and those thriving in the digital age. The real joy is simply in listening to people that are absolute giants of the industry discussing their work. Jim Davis (Creator of Garfield) and Bill Watterson were two of my highlights, but there are many, many more that offer their insights and experiences into the art and business model of the fantastic medium.

Very early on there is an obvious divide between the older generation of artists and the newer. Having little knowledge of the inner workings, it’s absolutely fascinating to watch the two sides discuss why their particular business model is the best. We have artists vouching for syndication on one side, the idea that you sell your strip to a syndication and they sell it to individual newspapers. Then on the other side are the digital age artists that pay to host their own websites and sell their own merchandise swearing by their method. Despite differences all the creators featured in this film share a passion for their medium. They love it almost as a parent would love a child. They’re angry with it at times, tired of it. But it is what defines them, and the act of putting words and pictures together fuels them in a way that allows for a perfectly paced documentary film.

Stripped would be a fun watch for anyone, even more so for someone that grew up loving the funny pages. Among the interviews is the first ever recorded interview with Bill Watterson, which is itself worth the run-time of the film. The pacing is perfect with a score that is neither distracting nor boring. Ideas and ideologies are bounced off the viewers all while the evolution and history of a beloved medium draws itself onto the screen. It is not, however a story with an end. Comics, despite what some might say, are not dying. This is a time of transitioning and change. A time of uncertainty, but one of hope. This is the message of Stripped. A message that may or may not be true, but one that immensely interesting to hear.