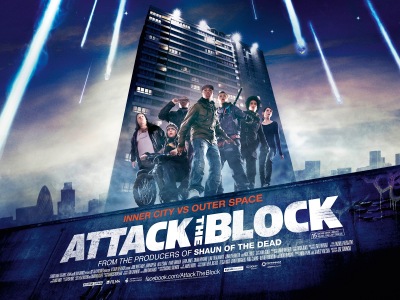 Writer/director Joe Cornish tries his hand at an alien invasion flick in 2011’s Attack the Block. We’re shown an invasion unfold before a teenaged gang in south London who quickly decide to defend their “block” a large apartment building in which they all reside. Instead of dealing with aliens with full scale warfare or secret services dealing with them, we’re given something different in that this movie is basically one big turf war between wolf-like extraterrestrials and a group of thugs. It’s quickly realized that the norm of this alien sub-genre is quickly traded for something unfamiliar, which is what makes Attack the Block as fun as it is.
I should note that I had a hard time sympathizing with the main characters of the film. Within the first scene the group of unruly teenagers mugs a woman in the street at knife point. She is unharmed and, as the movie progresses, becomes their ally. A clear point is made that these kids are not good kids, but their “true selves” as the movie would have us believe will shine through when it comes to protecting their own and defending their block. Even as the movie progressed and the characters became more and more sympathetic, it was hard to completely side with them. This didn’t mean that the movie wasn’t fun, on the contrary, it was a blast! Seeing a group of teenagers defend themselves against a highly aggressive, yet unintelligent race of aliens in a suburban setting is something that you don’t see every day, and Cornish certainly gives us amped up entertainment with plenty of action, violence and character.
The characters, though unlikable at times (read: often) are engaging and interesting. The fighting tactics of both sides is crude, with the aliens clearly being more agile and strong than the humans. The advantage that the gang has, however is that they all grew up on the block, they know it like the back of your hand. The movie plays out in the same manner that you may have imagined your friends defending your neighborhood from aliens growing up. Bikes, baseball bats and squirt guns filled with lighter fluid. The director certainly knows his way around the action/comedy genre and he gives the audience plenty to look at and get excited about.
This isn’t the most thought provoking Sci-Fi to come out this decade, nor is it one of the best, but what it lacks in depth it more than makes up for in pure entertainment value. While not the deepest Sci-Fi to come along, Attack the Block shows real production value in the hands of a film maker who clearly knows what he wanted to portray and how to portray it.